I was not going to write a post this week. Honouring the dead with silence seemed more in keeping with the centenary of the end of WW1. Having recently completed a novel about that conflict, the horrors of it are all too fresh in my heart and mind. But, I felt moved to write this. Lest we forget.

I stand on the battlefield, careworn and weary with my own soldiering, sheltering my palmful of treasure. I cannot know the horrors that drench this earth, but I will still stand here with you, shifting the weight of my ignorance from foot to foot, my hand curling around the black dots, waiting for the right moment to release them.

I will keep silence for just this little while, when you have kept it a hundred years. And when I am soaked in the greyness of the clouded sky, and the countless white crosses have floored my heart, I will close my eyes and feel the solidity of the sadness in this land. It rises up through my soles, it tugs childlike at my humanity, it wrenches my gut, it bayonets my heart.

And when that song of your untimely end has pained its way along my living sinews, and shuddered my synapses, and made me remember you, only then will I say, “Lord have mercy,” and throw my poppy seeds into the harsh November wind, that they might be carried like you by chilly winds of chance, and thrown into the mangled mud of no-man’s land, the possibility of red resurrection always there, bright flowers on unmarked graves and trampled terror. 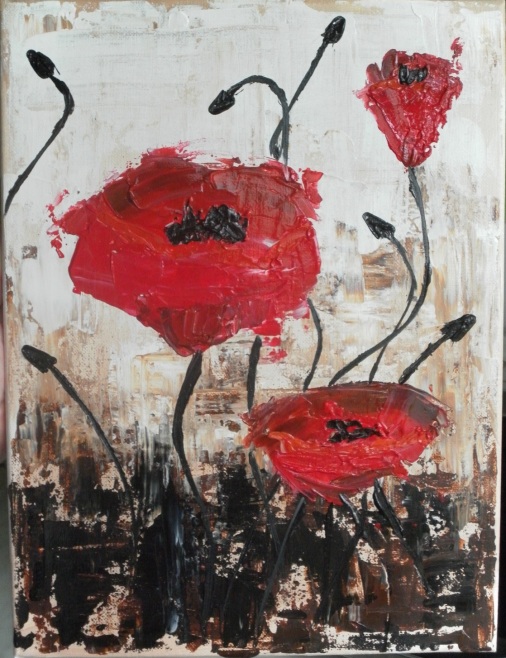 Today is Remembrance Sunday, when we traditionally think on the sacrifice made by servicemen, women and animals in wartime, who have bought the peace we live in at a horrendous price. I am a pacifist, but it doesn’t stop me being grateful, overwhelmed and sad, at the sacrifices that have been made. I have every respect for those who laid down their lives.  This year, it’s all a little more poignant for me, as I am finishing up a novel I’ve spent 2017 writing, set in England during WW1. It focuses on the experience of bereaved women, but the research has been harrowing to say the least.

Another thing that has brought the reality of loss home to me is the recent discovery that my husband’s great grandfather died in France in March 1918. His name was Frank Hunt and his name is engraved on the the Arras Memorial at Faubourg-D´Amiens Cemetery.  He is just one name among hundreds of thousands of British troops killed of course, but sometimes just that one person and their connection to you, can be a revelation that opens up our compassion, when a heart cannot cope with the legions of deaths from both World Wars and more.

“Lest we Forget” is the constant refrain on Armistice and Remembrance Days. It seems impossible that we ever would. And yet, today we are still dealing with the phenomenon of Holocaust deniers, the rise of the far right, yet again, and the lack of respect on all political “sides”, for those who have fought, been injured or died for their countries. Even the very liberal left have their strange rhetoric about remembrance glorifying war, which is horribly disrespectful, I feel. One can be sad about the losses and grateful for the sacrifice without condoning violence. One can believe war is the wrong way to go about solving problems and yet still be respectful of the suffering of those who went to fight and die, often without any idea of the horrors they were being sent into.

We are still at war of course, a seemingly unending mess of bloody conflicts in the Middle and near East since the First Gulf War began in 1991. Afghanistan, Iraq and Syria, Serbia, Rwanda and all those  conflicts, deemed somehow lesser by the media that we hear little about in our news stories, all the tribal conflicts and border disputes, and in a smaller way in our everyday lives, the wars between race, gender, sexualities, political parties, even church denominations.  Fighting, it seems, is in our blood.

But we should take heart that part of the human condition is also reflecting the Father’s character and the Son’s sacrifice. That wherever there is conflict, there are also diplomats, medics and chaplains. That there are always, somehow, people willing to stand up to evil ideologies and megalomaniacs. That there are always truth tellers, dream-mongers and peacemakers, like Gandhi and Desmond Tutu, as well as social activists seeking to bring about a lasting and level playing field, like Martin Luther King and Dorothy Day.  And when we remember the millions of people who have died in war, both military and civilian casualties, as well as those affected, traumatised, injured or bereaved because of conflict, we do well to honour their sacrifice, their losses and their journey. If we deny this, or choose to forget, we may never learn to change course. May we always remember, and let it lead us to do everything we can to foster peace.